Technology makes the Düsseldorf Stadttor easier, safer and more efficient for its users. Standard air-conditioning – using environmentally damaging FCKW – has been avoided completely. Depending on the outside temperature, the building’s large windows can be opened to allow fresh air in.

Düsseldorf’s mild climate and the high-quality, innovative dual facade mean that the building can have fresh air for the biggest part of the year.

It is only during the more extreme seasons that a ventilation system must be used to ensure comfort.

During the winter months, the Stadttor only needs to be heated on a few, particularly cold days.

For ecological reasons, this is accomplished by using waste heat from a nearby electricity plant. In addition, the heating is aided by heat recovery through the ventilation system.

In the summer months, the outside sunshield ensures that the building is not overheated unnecessarily. The air intake is reduced to a comfortable temperature through adiabatic cooling, which is particularly ecological.

An intelligent building lives from the intelligence of its technology, however.

In the Düsseldorf Stadttor, more than 14,000 sensors and control points make sure that the building is constantly monitored and that any complications can be dealt with as soon as possible.

This building services management system makes sure that the Stadttor’s different technological components all work together in harmony, proactively supporting each other.

Three escalators and eight high-speed elevators aid work in the Stadttor, as well as a computer-controlled lighting system (EIB) and an electronic locking system that meets tenants’ high security standards. 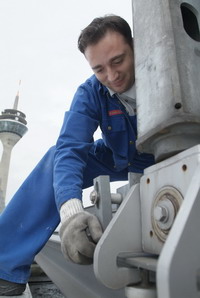